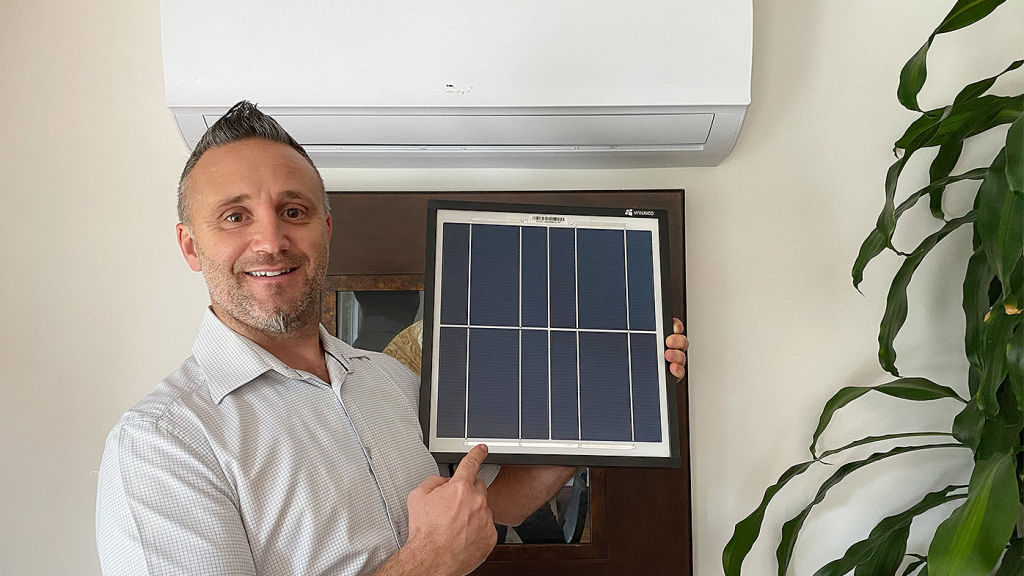 It sounds the most gloriously simple idea far too good to be true – solar-powered airconditioning.

But now it’s possible to harness the free power of the sun to cool your home with the release in Australia of a system specially designed to suit local conditions.

“It’s just so neat,” says one of the first adopters, Sydney GP Dr Caroline Rogers. “The sun comes up, it feels a bit hot and immediately the airconditioning comes on. I love the idea of turning the heat from the sun into cool air.

“And for winter, it’s reverse-cycle, so it’ll be as warm in winter as it is cool in summer.”

Dr Rogers, 51, and her husband Tim, 53, were looking for a way of cooling the uncomfortably hot study on the upper floor of their two-storey Manly house after Tim started working from home during the pandemic.

They didn’t want to install conventional airconditioning as they didn’t want to add to global warming, but then came across a Melbourne company that has released a next-generation airconditioner that comes with its own built-in solar panels and which, once installed, costs nothing to run.

As well as being marketed to people in the cities, it’s also being seen as a boon for rural communities that have previously been unable to install airconditioners due to poor power grid infrastructure. The unit can also be used for off-grid living.

“For people in suburban areas who aren’t pensioners, the savings are so great, the cost of the installation will be made back in one to two years,” said Rob Miravet of the company Solar ACDC. “The system comprises an auto-start function that turns on when there’s enough power in the morning, and then turns itself off in the afternoon once there’s less sunlight.”

Rob Miravet of Solar ACDC with the solar-powered air conditioning unit. Photo: Supplied
The new solar-powered air conditioners use dedicated photovoltaic solar panels to power the units which are fully DC, which means they can accept direct variable DC power from the panels. Conventional solar systems will power off if they disconnect from the grid or in the case of a blackout.

There’s no need for batteries or inverters or charge controllers as they work directly and will power on during the day when there’s sunlight, and power off when the light fades, and it becomes naturally cooler.

The system costs around $4,000 to install, including having solar panels fitted – perhaps as few as four to power a small unit, and up to eight for a larger unit.

“We looked at all the options for air conditioning for the study upstairs, but we didn’t want to use grid electricity for it because we’re very concerned about climate change and didn’t want to release more carbon into the air,” said Dr Rogers. “That didn’t seem a reasonable price to pay just to make us more comfortable.

“I knew, if we had conventional airconditioning, I’d also be reluctant to turn it on for that reason. But we came across this, and it seemed a good option. It cools down the study beautifully and, because hot air rises, it also cools the house downstairs too.”

The company claims that savings over the lifetime of the units could be between $8000 and $30,000.

“Because they work independently of the grid, you can leave them on all day without worrying about the cost,” said Mr Miravet.

“Cooling the house during the hottest part of the day with free electricity is why these solar air conditioners are so successful, rather than  switching on a traditional airconditioner that has to work overtime to cool a hot house when the resident arrives home.”

Solar-powered airconditioning was originally pioneered in Africa and the Middle East for cooling telephone towers and battery rooms in very hot, remote areas where equipment had to stay cool to operate effectively.

Back to News Page!